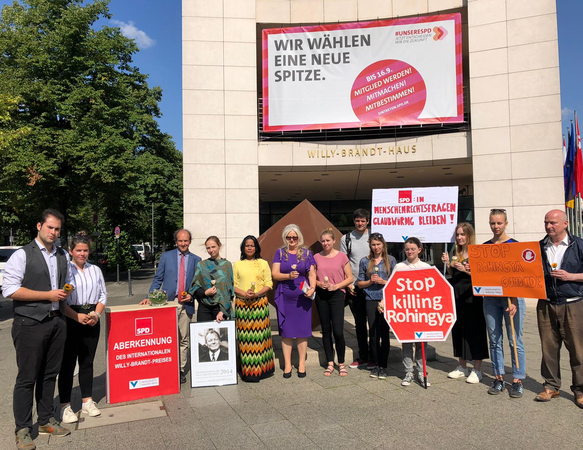 Today, the Society for Threatened Peoples (STP) and Dr. Anita Schug, a representative of the European Rohingya Council, organized a joint human rights campaign in front of the SPD headquarters in Berlin. The organizations urgently called for the Social Democrats to withdraw the International Willy Brandt Prize from Aung San Suu Kyi, the de facto head of government of Myanmar (Burma). Two years after the beginning of the genocide against the Muslim minority in Myanmar, the SPD must show solidarity with the victims of the crimes, they stated. The STP underlined its demand with the words of Willy Brandt: “Whoever allows an injustice to continue is paving the way for the next one!“

On August 25, 2017, the mass expulsion of the Rohingya by the armed forces began. “Meanwhile, the United Nations have classified the committed atrocities as a clear case of ethnic cleansing and genocide,” stated Jasna Causevic, STP Expert on Genocide Prevention and the Responsibility to Protect. “Aung San Suu Kyi, Foreign Minister and State Councillor of Myanmar, has become an accomplice. She systematically denies the genocide and justifies the actions of the military and the police.” Through her appeasements and failure to act, she prevents effective prosecution and contributes to the continuation of human rights violations against Rohingya.

“Aung San Suu Kyi does no longer deserve to be known as a winner of the International Willy Brandt Prize,” Causevic said. “She must not continue to trample on the intellectual heritage of this great man of the Social Democratic Party.” The behaviour of the formerly respected politician when faced with the genocide of the Rohingya had caused incomprehension and consternation all over the world. Several highly respected international institutions – including the Holocaust Museum in Washington and Amnesty International – have already withdrawn their awards to her. The STP now calls on the SPD to follow these examples out of solidarity with the victims: "If the International Willy Brandt Prize is not to degenerate into a worthless award, the party executives must take the fate of the genocide victims seriously,” the human rights activist warned.

The International Willy Brandt Prize has been awarded four times between the years of 2011 to 2015. In 2014, Aung San Suu Kyi was awarded the prize by Sigmar Gabriel, who was party leader at that time. Even then, the STP had criticized Aung San Suu Kyi’s silence on the worsening situation of the Rohingya in Myanmar. The expulsions and open violence had started in summer 2012; and one million Rohingya have since found refuge in Bangladesh. They live in some of the most densely populated refugee camps in the world – with no prospect of ever returning home. In Myanmar, the Rohingya are still not recognised as an ethnic group. The state does not grant them human or civil rights.

The appeal can be found under the following link.

Contact: Jasna Causevic, STP Expert on Genocide Prevention and the Responsibility to Protect